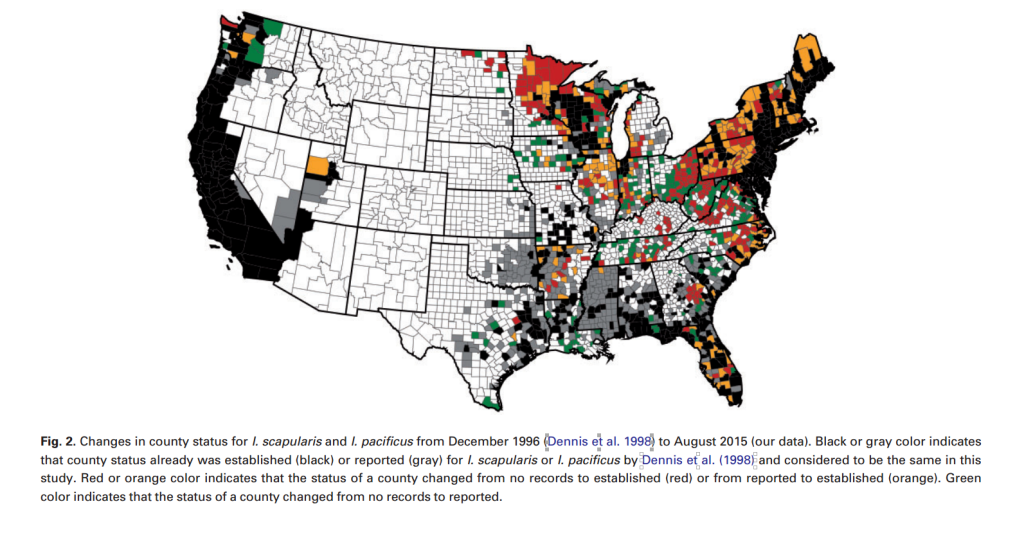 A study published in the Journal of Medical Entomology reports an overall expansion of the tick’s distribution, especially in the northern regions of the United States. Although the nationwide number of cases have dramatically increased for the last 20 years, monitoring these 8-legged creatures had been limited to local regions. This study highlights the need for continued tick surveillance, research regarding tick biology and ecology, and community outreach to restrict human and animal exposure to ticks.

The blacklegged tick, or deer tick (Ixodes spp.), is the primary vector of Lyme disease, an infectious disease caused by Borrelia burgdorferi, as well as other bacterial disease agents. Of major concern to us locally is the considerable expansion of ticks in North Carolina going westward. While the expansion of the deer tick may be worrisome, this trend is likely due to the return of deer populations and forest habitats to their former range.

Ticks and tick-borne diseases in North America are becoming a major concern for the scientists, industry professionals, and the public — The Entomological Society of America (ESA) in collaboration with the Centers for Disease Control and Prevention (CDC) will be having an Integrated Tick Management Symposium in Washington D.C. May 16-17, 2016. More details about the symposium and registration information can be found here.

If you would like more information on ticks in your area consult these links below:

About the Author: Kim Hung

Kim is a post-doc specializing in med/vet entomology, chemical ecology, and behavior. She likes to play with flies, dabble with microbes, take photos, and eat insects.
Tweets by @MichaelReiskind