It is well known that certain mosquito species can be adapted to better utilize particular environments when compared to other habitat generalist species. Researchers have worked to characterize mosquito populations in wild habitats, such as woodlands, fields, and the boundaries between these habitat types, known as edges. Because of this, you can get a pretty good idea of the types of mosquitoes you can expect to find in wild areas. However, little research has addressed how suburban development affects these assemblages of mosquitoes. Suburban developments, like that in the picture below, typically have a mix of habitats: some fields (lawns), some woods, and the addition of manmade materials that could provide suitable mosquito habitat (such as gutters, pet food/water dishes, etc.). With this in mind, are suburban mosquito assemblages like those found in wild fields or wooded habitats? Or are they something all their own? 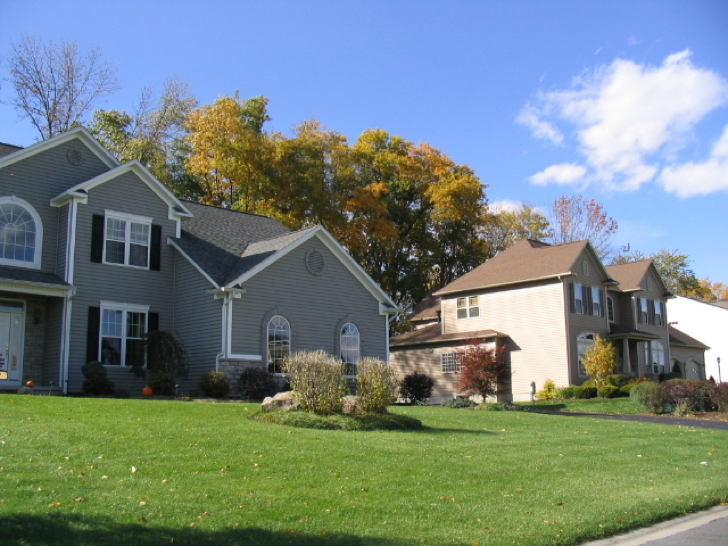 A typical suburban landscape. From a mosquito’s point of view: woodlot, field, or other?

Last summer, I set out to answer this question. Along with the help of some trusty undergraduate workers, I trapped mosquitoes at a total of 48 sites, including wild woodlots, wild fields, and suburban developments of different ages. In each suburban age group, I sampled some suburban areas that were previously woodlots before development, and some that were previously fields before development. I then identified all of the mosquitoes to species and also assessed their parity status to get an idea of what a typical suburban mosquito assemblage looks like, both in species commonly found and in the population age structure. (See A Day in the Life to get a taste of what this type of work is like!)

Over the course of the summer trappings, I caught 20 different mosquito species and about 4300 individual mosquitoes. Almost half of these mosquitoes were Aedes albopictus, the Asian tiger mosquito. Ae. albopictus is an invasive species that seems to be very adept at living in close contact with humans. Part of the reason that they’re able to live peridomestically, or in close contact with humans, is because they breed well in artificial containers—meaning that ideal Ae. albopictus larval habitats are found near homes, such as standing water in pots, pet bowls, tires, and other yard trash.

My summer field results show that the most diverse sites (those with the highest number of species) were the wild wooded sites. After development, the diversity almost immediately decreased and continued to decrease as the neighborhood grew older. However, although overall diversity decreased, suburban areas supported mosquitoes that have varied habitat preferences. I found so-called “field species” as well as “wood species” in fairly high numbers in these suburban neighborhoods. Interestingly, the species that were found most frequently when sampling suburban areas, such as Ae. albopictus, Culex pipiens, and Anopheles quadrimaculatus, are all vectors of dog heartworm, a parasitic worm that infects companion dogs and cats as well as wild dogs (coyotes, wolves, foxes, etc.).

These results suggest that suburban development is creating its own unique mosquito assemblage—one that could be especially adept at transmission of certain pathogens, particularly because of the close proximity of potential hosts, such as pet cats and dogs. We are currently working on DNA extraction of the mosquitoes from last summer to check for the presence of dog heartworm. Will dog heartworm also be present in higher numbers in these suburban areas?

Meredith is a PhD student studying the dynamics of dog heartworm disease.
Tweets by @MichaelReiskind