Dog Heartworm as a Case for Evolutionary Thinking

The dog heartworm, Dirofilaria immitis, causes severe pathological effects on the cardiopulmonary system in dogs and has a high, and fairly stable, prevalence and incidence. The sexually reproducing adults can live up to 7 years in the host, while the mosquito-infective microfilaria stage can circulate in the host’s bloodstream for up to 2 years. The primary hosts are domestic and wild dogs (wolves, coyotes, foxes, etc.), but it can infect cats, humans, and other mammals. These alternative hosts are dead-ends, as microfilaria cannot be produced. D. immitis is unique among vector-borne diseases because it is naturally vectored by many mosquito species. 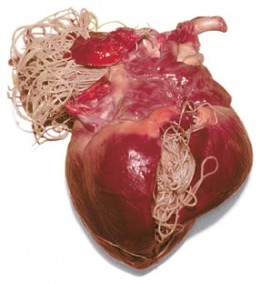 A dog heart with a heavy heartworm burden.

D. immitis is distributed throughout most of the world. In the US, canine prevalence ranges from 1-12%, but certain areas like the Gulf Coast can have rates up to 48.8%. Even non-target hosts like humans have antibody prevalence of 5.2-27%. Because of the vector component in this system, the disease shows landscape variation and susceptibility to global climate change, with increasing prevalence in recent years. Relocation of pets due to natural disasters (like Hurricane Katrina) or travel could be allowing Dirofilaria species to invade areas where it was not previously found. Health certificates, which are necessary for pet travel, do not mandate that animals be screened for heartworms; with many potential mosquito vectors, movement of heartworms away from their usual vector may not be detrimental to the parasite’s life cycle.

The origin of Dirofilaria in the Americas is unknown and genetic data is limited. A recent human case in Brazil revealed infection with a worm that appeared similar to D. immitis, but was genetically distinct. Particularly in light of drug resistance reports, circulation of cryptic Dirofilaria species is possible.

In this case, evolutionary thinking could help us understand the unique parasite-vector relationship as well as the responsiveness to climate and landscape variation. It could help us pinpoint the origins of D. immitis in the Americas and better interpret the relatedness of known species, and also in the identification of possible cryptic species. It could even help us understand the situations in which drug resistance arises, which has a clear economic benefit to the veterinary drug industry.

As is shown by the example of dog heartworm disease, looking at the bigger picture and considering how evolutionary processes are affecting a system could lead to interesting research questions and potentially beneficial insights.